Are you a sociopath?

I would like to publicly thank Carolynn Middleton for posting her letter: Caseworkers- Are You Contented? We’ve all asked ourselves the same questions, in a nutshell we want to know what kind of animal could be so cruel to another human being?

I would like to print this letter off and get it into the hands of every caseworker in America.

Caseworkers- Are You Contented? 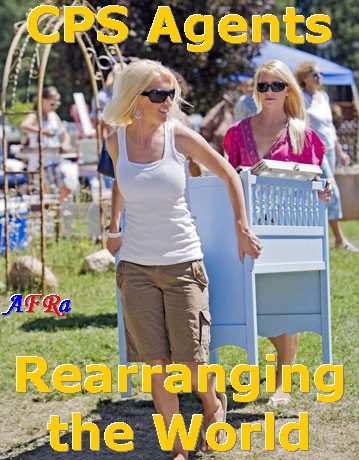 We all like to think of ourselves as righteous, noble, honorable, and ethical, with dignity and self respect. But, in cases where there is no abuse/neglect, or where indications of abuse/neglect are quite questionable, how do you sleep at night. How do you live with yourself knowing that, earlier in the day you tore a family apart? How do you look at yourself in the mirror in the morning, knowing that you apprehended a child(ren), taken them away from their parents, and left a family devastated, and maybe you really didn’t need to?

Think for a moment…

Whether you are a religious person or not, this is a pretty good Personal Rule, “Do onto others as you would have done onto you.” With that in mind, how would you feel if someone came along and hurt your children, your spouse, and your family, without good reason, even though they may have thought they had good reason?

In many or our planet’s animal species, the mother will die trying to protect her offspring from would-be predators. I know there are cases where children need to be taken into custody to protect them.

But what about all of those children who’ve been apprehended who don’t need to be?

I know many people who got into the field of social work because they wanted to help others. That is a very noble sentiment. But how does unnecessarily devastating a family and tearing it apart, help? How does dragging parents into court and through a long and drawn out bureaucratic process help? Certainly if a child is being seriously abused/neglected- then they need your help, and the important thing here is to try and help them.

But many foster homes are either inadequate or run by people I wouldn’t trust to care for my pet rock. [Continue Reading…]

Whether you mail it, email it or hand deliver it, doesn’t matter. What matters is getting CPS Agents to examine their own motives. I’ve personally spoken with caseworkers, investigators, even supervisors who staff child protective service offices and many of them are feeling guilty about the work they do. Any worker worth their salt knows she is causing more harm than good.

Perhaps, we can give them a little shove in the right direction. This is not about simply collecting a paycheck. We are dealing with the lives of millions of children. The entire makeup of the country is being changed – hardly a single life has been left untouched by the vultures at the Department of Health and Human Services. The family unit is being destroyed and our nation will never be the same.

We should refer to this generation as The Lost Generation. You don’t have to be a statistician to realize the significance of the numbers. I am involved with family rights issues on a daily basis. I consider myself very informed on the issues and these numbers even freaked me out. I’m devastated by these numbers. I’ll let you draw your own conclusions.