If you speak to anyone who has ever dealt with the Child Protective Services (CPS) engine, they will likely tell you they wish they had been informed of their rights prior to the initial contact.

Most parents don’t believe CPS is a problem agency, until they have been contacted and frankly, by then it is simply too late. You can’t expect to win a battle when you don’t know or understand the rules of how the game is played.

Just ask any chess player. You must know the role of each piece and how they move and attack. Each piece is different and they all have their strengths and weaknesses, which can been leveraged to your advantage or used against you.

Don Lyons is a parent, who has faced CPS and won his battle — learning a lot about how the system works along the way. His precious girls were placed into the foster care system, he was threatened with the loss of his parental rights and suffered a litany of dirty tricks, lies and scandalous behavior. To his credit, he fought the system, Pro se and won.

Pro se legal representation refers to the instance of a person representing himself or herself without a lawyer in a court proceeding, whether as a defendant or a plaintiff and whether the matter is civil or criminal. Pro se is a Latin phrase meaning “for oneself”.

He explains the rules as they apply here in California and in most states. He walks you through the legal process and provides critical details that you must know, if you plan to beat the ugly beast known as family court.

“In his book, “Warning: The Truth about Child Protective Services and The Staggering Impact on Society,” my friend Don Lyons, documents 5 different ways they can get paid.

Also Many Judges’ retirement is tied to the number of cases where DCFS is deemed to be benefactor for the children or they actually sit on boards for the operators of Foster homes. 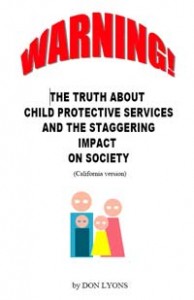 Don’s first book, Warning: The Truth About Child Protective Services and The Staggering Impact on Society, has been widely read and has helped many parents successfully gain the return of their children from state custody.

His new book will be announced shortly, so be sure to check back for more information on his latest book.

Those who have lost their children will be interested in reading Don’s book, but those who really need this book are the parents whose children are still safe at home. So please, at this special low-low-price, order two and send a copy to a friend or family member.

Regularly Priced at $19.95 – Get it today for only $4.95! This special deal won’t last forever, so order your copy today. Click below to order.

Warning: The Truth About Child Protective Services
and The Staggering Impact on Society