My Child Lives in Fear!

My name is Ashley H. and I have a son named Gary. Gary lives with his mom (Miranda) and step-father Chad and brother Joey in Kingsport, Tennessee.

Gary and his brother Joey fight constantly and don’t get along to the point that Gary stays with his grandmother and Joey stays at home until Miranda gets off of work. They are constantly picking on each other and in a constant battle for acceptance.

I am writing to anyone who will listen and help Gary. Gary lives in fear of Chad and has been physically abused. Chad has left a 16 to 18 inch bruise on Gary’s buttocks in the shape of a belt. Miranda’s family begged me not to press charges and in return they would make sure Chad would never physically disciplines Gary ever again. I made a mistake and complied with their demands. 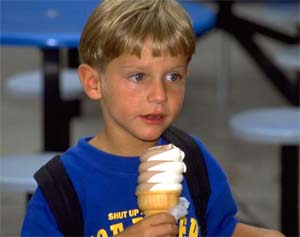 About 6-months ago, Chad spanked Gary again, Gary called me from his cell phone and I called the police and headed to their house. When I arrived there, Chad was there but Miranda had taken the boys to her grandmothers. The officer looked at the red mark on Gary’s leg and said it looked like a normal spanking mark. That broke the agreement between Miranda’s family and I. When Gary called me, Chad immediately took his cell phone and threw it down the steps — just for calling his dad!

Gary came the following weekend for his visit and was scared to go home! So instead of calling the police I called his mother and told her the situation and she did the one thing I thought she would never do and that was manipulate Gary to get him to come home. The phone was on speaker phone and Gary was crying and pleading with his mother and telling her he was scared to go home and then she did the unthinkable.

She said “Gary, I am going to tell you something and you better not repeat this, but you are the favorite in this house, don’t you see how Chad treats you and how he treats Joey?” Naturally Gary went home thinking he had beaten Joey and that he was the favorite child.

That is very disturbing to me because:

The police officer even told me that after the first time (meaning the big bruise) that he would never let the guy touch his kids again.

In Tennessee DCS meeting they saw nothing wrong with Chad’s behavior.

Chad has turned the breaker off in Gary’s room, for punishment and forced him to sit in the dark with no electricity!

The most recent incident was a month ago. Gary was told to go to bed and he went in his brothers room to ask a question and Chad grabbed Gary by the neck and drug him into his room. The next morning Gary told me his neck was sore and the pain stayed for several days.

Gary is an ADHD child, his mother keeps him drugged up all the time and he is in therapy. I was attending his therapy sessions just as his therapist suggested. The therapist thinks Gary’s biggest conflict is that Miranda and I do not get along and that is not my fault, she won’t let go of the past. Chad put a stop to me going to his therapy sessions saying, “not on my dime!” Miranda is not raising a child, she is raising a drug addict. They give him an upper in the morning and a downer in the afternoon and downer at night.

I put Gary into Mixed Martial Arts to learn discipline and self control because I have done extensive research into MMA and it has been found to be a terrific teaching tool. In many cases the medications have been discontinued after this kind of training!

I gave Gary a pen and piece of paper and told him to write down the truth about his home life. Here is his words exactly:

WHEN CHAD GETS MAD

4 whipped me with a beltmade big bruise

Chad has a temper

I am scared when he does

Scared to talk back to my mom

(I asked him what he meant by that because I told him he wasn’t suppose to talk back to his mom and Gary said, “No, if I want to see you and mom won’t let me I am scared to say anything to her because I don’t know what Chad would do to me.”)

Chad leaves welts and bruises on me

That was the front page and now the back page:

I feel like my own mom doesn’t love me because I want them to work it out but she doesn’t want to she would rather go to jail.

(He was talking then about his mother and I having a civil relationship. Chad would never let that happen because he is too overbearing and jealous.)

The sad part is, they split up Christmas before last and she told me she was scared of Chad’s temper. The only reason she went back to him was because of their debt. She is an accountant for a Credit Union and would lose her job if they default on a loan or file for bankruptcy!

I am going to send this to anyone who will listen and I am looking for any agency or child advocate that will help me. If you know about any agency local, state or federal that can help me please let me know who they are and/or pass this on to them!

I am sick of my child living in fear but I am trying to keep a cool calm head and get this resolved in the right way, so please help me if at all possible!

Gary has a dream —and that dream is to fulfill his dreams and show other people they can achieve their own dreams. Don’t let anyone tell you, you can’t do something and overcome obstacles! That is Gary’s message and I am going to do anything to see his work and message and dream is fulfilled!

I am enclosing Gary’s original message!