In a Former Life…

It’s not really public knowledge (until now) that I was a little nuts back in my youth. It seemed a perfectly natural thing to me, when I ran gorilla style holding my section of our heavy logging chain. We hurriedly wound our weighty burden around posts, window bars and anything else that was fastened down, after which we locked in with Kryptonite Bicycle Locks.

The spectacle we made of ourselves – there were about a dozen of us on what we lovingly called the “chain gang.” We were warriors in a fight against death.

I don’t recall the exactly year but I do recall vividly the day 173 people were arrested for closing down the Center for Choice II in Toledo, OH. My fellow warriors and I were elated that no children would die at that clinic that day. It was what might be considered a hollow victory but in my heart, I truly believe that at least one life was spared that day. One mother made the decision to give her child life. 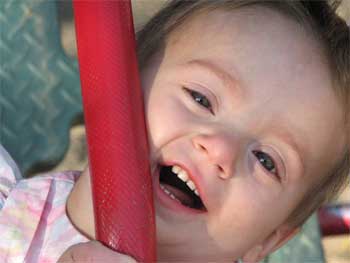 Someday I dream of meeting such a person. Maybe it was a girl and what if she grew up to be a doctor or professor and taught others to save lives?

I “rescued” many children in my activities with Operation Rescue, lead by Christian activist Randall Terry. He inspired thousands through word and deed to create a movement that had decided to put action to their words. It was a time of great sacrifice and love.

In recent years, I’m ashamed to say saving innocent children from a certain death has not been first and foremost on my mind. I guess my mission in life hasn’t really changed all that much. I simply changed focus. In my heart, I know that little unborn children are sent to be with our Lord and that can’t be a bad thing.

On the other hand there are millions of children being torn from their parents arms. State workers are breaking hearts, killing our beloved children and committing heinous acts of unrelenting cruelty.

I will never understand how these people sleep at night. And how is it that the children who honestly need and deserve help never seem to get it but perfectly happy children from healthy environments end up being stolen from their families – not just their parents – but their entire family? These children are losing their birthright, their inheritance; their entire life will never be the same.

This is cultural suicide. What is our nation going to look like 20 years from now? Every single one of us know someone who has lost his or her children or is fighting like hell to keep them. How long do you think it will take before these actions will have a detrimental effect on society at large?

It is a well-known fact that foster children rarely graduate from high school; they are much more likely to end up in jail than children from mainstream families.

How can our trusted legislators and congressmen sit idly by and do nothing? Many have written to request help, very few families, if any, have ever received any. Families who are targeted generally end up in dire straights as they are slowly bled dry and financial reserves are depleted by greedy attorneys, heavy-handed court orders and in many cases child support. Isn’t that a slap in the face?

Not only do they remove your children, against your will but they make you pay for it as well. Give me a break.

This is wrong and everyone knows it. Just like abortion. I’ve talked to thousands of people about abortion and no matter how convincing of an argument a pro-abortionist makes, deep down in their hearts they know killing is wrong.

Right is right – Wrong is wrong and killing is always wrong, unless it’s in self-defense and what chance do defenseless children have against a society hell bent on destroying their lives.

The system would change really quickly if every foster child sued the state that ordered their removal from his or her family, as soon as they turn 18. Sue for damages, emotional distress, your life has been stolen, without compensation.

I guess I’m still a crusader at heart. No wonder my son wants to be a super hero.