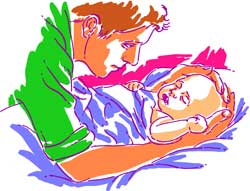 My girlfriend and I got into a heated argument and she was taken to jail for domestic battery.

Since we were not married, they took my beautiful 5-month-old infant daughter. Despite my name being listed on the birth certificate, they said they had to take her because I had no legal parent rights to the child.

We both appeared at the emergency hearing, and I testified that I was her biological father, and so did my girlfriend. I established paternity, but they still kept my daughter. I was assigned a caseworker, and was able to visit my daughter a few days ago for one hour.

During the visit, I noticed her hair was all matted up, and could not be brushed because of the entanglements. She has also developed a severe diaper rash, the likes of which she never had while with her mommy and daddy. She has developed a rash on her cheeks, which looks like she has been sleeping in her own slobber.

She appeared drugged – no longer the happy little baby girl she was while in our custody. She was lethargic, like she was doped up on Nyquil or something. I brought with me a parental visitation form, and documented this in front of the caseworker. She said I could expect some of these types of things, to which I disagreed. I was able to videotape the evidence.

Here in Arkansas, there is some law, which says a child can be taken if the father isn’t married to the mother. What a load of crap! My attorney said that he would file an emergency petition if her condition get worsens. I am scared for her safety. The caseworker is recommending drug and alcohol assessments, and I wasn’t charged with anything!

I feel like my rights have been violated, and even worse my daughters’ rights! This has devastated my family, I feel like they had no legal right to place her in foster care to begin with. On the Arkansas Department of Human Services website, it says that because of a “shortage” of caucasian infants, they are not taking application for adoption for “white” babies, only “black” infants! This makes me cringe, because my baby is white, with big beautiful sky blue eyes, and is very adorable.

I feel like they are trying to steal her, for federal funding, and adoption bonuses. The next hearing is set for August 15th, and I am only able to see her for one-hour each week, and they have an hour and a half drive to see me.

When I picked her up last time, I could tell that she sat in a soiled diaper the whole trip! What a travesty. Can anyone help? Does anyone have any suggestions?