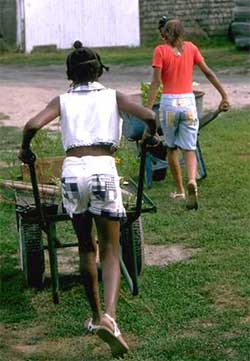 I just had a horrible epiphany today as I was researching CPS problems.

It seems that every so often, though random, someone under CPS scrutiny kills their children. Now, we all know that under some circumstances if you work with CPS and do everything they ask, you might be able to keep your children. But it seems to me that this only works with the guilty parents.

If you are innocent, they will do everything they can to take the kids from you — even commit perjury. Of course, if you fight them at all, you are guilty and they will try to keep you from seeing your kids ever again. (I read somewhere that working with CPS is like fighting a grizzly. If you fight, you are dead; if you run, you are dead; all you can do is play dead and hope they go away.) Think about it, though, almost always the family "was cooperating with CPS", then, for some strange reason kills the child, whether provoked by CPS or just snaps.

What does CPS say when this happens? "We are underfunded, understaffed, and overworked." We all know that CPS is more concerned about funding than the children, as witnessed in my latest court case when CPS wanted to close the case in time to get funding, even though the children are still in danger.

There is the Banita Jacks story in Washington, DC, where a mother killed her four daughters and the case of Elisa Izquierdo killed by her mother in NY City. Both families were known by CPS officials.

In Phoenix, a child, Trenay Duchane, was killed by her father and stepmother, Jeffery Duchane and Reiko Troupe. While under CPS monitoring, social workers reported that the girls had a good rapport with Troupe, who they called "an attentive and affectionate parent." After they disappeared, CPS sent a certified letter saying "You have till October 14, 2006, before 5 p.m. to get in touch with me. Before further actions will be made concerning your children." Three days later, CPS closed the case and walked away.

The stories come in more frequently than anyone would like.

But, what if CPS simply "allows" this to happen. As horrible as it seems, what if they don’t care about the children. I mean really don’t care — allowing them to be murdered to show "they are overworked and underfunded." I am not saying it is a conspiracy where they all met at some undisclosed location and said, "just let a couple be killed." But, by simply recognizing that inaction "produces results and publicity." Yes, it is bad publicity, but what does the government do in response? They send more money.

I use to believe that CPS was there for families in need. When we needed help, I found out otherwise, but still believed CPS was there for the children. After we were accused of abuse, I still thought that CPS would work with us to ensure the welfare of the children because it was obvious that we were not abusive. After CPS perjured themselves in court, I realized this was not true. And after they sent the kids to their mother who was abusive, I questioned their motives. In court, the truth came out — they do it for the money and don’t care about the children.

So, I am researching this. If you know of any stories where CPS failed and a child died, please to me and post your stories and links here. I would prefer news stories with web links, but anecdotal will help. Though I would expect that if a child died at least one news story would be availble.

Please note, I am not affiliated with Kidjacked.com other than occasionally submitting a comment or idea and I too am a victim of CPS corruption and malfeasance.