Have you been following the Eldorado, Texas case, in which CPS agents removed 437 children from their parents care? The entire circus of events is simply shocking! 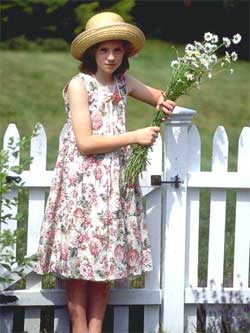 The entire case was based on an anonymous report of abuse. An arrest warrant was issued for the arrest of Rozita Estraletta Swinton (Dana Anderson) on April 18, 2008, the alleged anonymous caller. She is being charged with "False Reporting to Authorities," a class three misdemeanor.

Despite an arrest warrant having been issued, the children are still being held in custody at various locations around the state of Texas. It is clear officials believe the woman lied, so why haven’t the children been released to their mothers?

This case is one that makes absolutely no sense to me. They believe these children have been abused. Where is the proof? Some of the girls were married off to much older men at a very young age, some as young as 14. Is this really so shocking? Heck, back in Kentucky and in many other states, young girls were married off at the tender age of 12 or 13. It was quite common in the last century.

My biggest concern is the charge of polygamy, which to my knowledge is against the law in Texas and charges still have not been brought against the men. It simply doesn’t make any sense that the women and children were rounded up and the men were left free, when the men are the ones who broke the law. What crime did these mothers and children commit?

After reading through the "Emergency Motion for Stay Pending Review of Petition for Writ of Mandamus," it is clear to me that this entire case was mishandled from the very beginning. The state of Texas has a lot of questions to answer for violating the rights of hundreds of people. If CPS and the courts get away with the way they have treated these families, no family will be safe in the state of Texas. It will be open season.

Speak Out on Behalf of the Children